This year the Erie County Fair, which is operated by the Erie County Agricutural Society, runs from August, 10, 2016 - August 21, 2016. This years fair is the 177th. The fair was first held in 1820 in Buffalo, New York at the former Donovan Building near Canalside. After several years of being held in Buffalo, the fair was held in several locations, including Aurora, Lancaster, East Hamburg (now Orchard Park), West Seneca and Springville.

In 1868, Luther Titus of Hamburg offered to have the fair held on the Hamburg Driving Park Associations one-half mile track and grounds in Hamburg. The fair thus moved to Hamburg and has been held there since then. Since moving to Hamburg, the fair has been held every year other than 1943 when it was cancelled due to the need to ration gasoline and other supplies during World War II.

In 1881, the Society began buying additional acreage at the site. The first acres it bought were from Naomi and Maria Clark and George M. Pierce. Today the fairgrounds comprises 275 acres. The oldest building on the fairgrounds is the Octagon Building which was built in 1885. At present, there are seven gates by which one can enter the fairgrounds. The main gate in to the fairgrounds is Gate 1 (pictured below), which is located along McKinley Parkway. This gate consists of an ornate 40 foot steel span and was added in 1930 so as to allow for 4 cars to enter the fairgrounds at once. 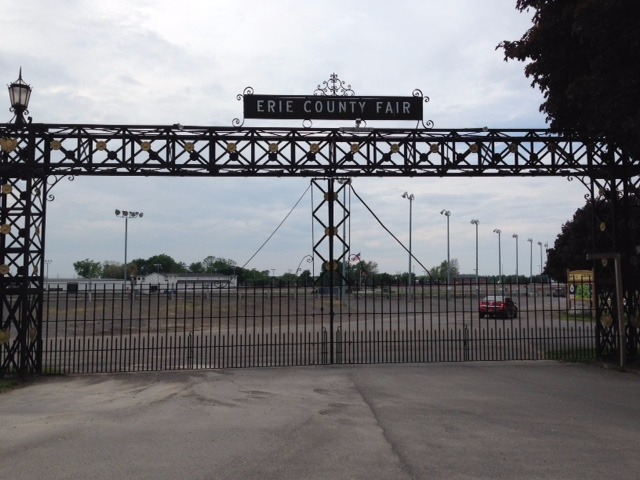